Another quiet start to the day – Bill and I took the bus to Chinatown after a late breakfast.  Walked around the area using the Lonely Planet walking tour as our guide, visiting the Buddha Tooth Relict Temple and then the Hindu Sri Manamman temple.  There were lots of small market shops along Trengganu St and many restaurants on some of the others.  The walk took us into areas of small balconied houses, probably late Victorian era.  Took the bus back to the hotel, stopping at a 711 shop for a lunch snack, then up to our room for an afternoon rest. 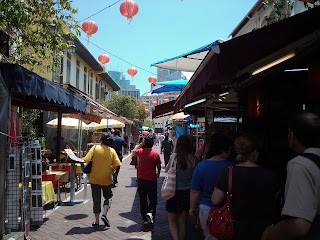 We met in the foyer for the coach at 16:30, reaching the ground a little about 17:15, in good time to start preparations for the match at 18:30.  Team talk, stretching, Pilates and final team talk. The Aussies looked good for the first 10 mins, winning a couple of corners, but we played our way into the game and started to put them under some pressure.  We won a series of corners, unconverted, and then Kaka was fouled as he went to shoot and Tim stepped up to take the flick.  Sadly, he slipped as he was taking it and the keeper saved.  Subbed on an off at left wing and left midfield.  Into the second half, at all square, it was fairly even, but again we had several shots saved and had the bulk of possession.  So it was very unfortunate that the Aussies went 1-0 up with about 10 mins to go, with a breakaway and a diving reverse stick shot. My first international defeat – which is galling, especially as we all played well – must get the ball in the net!
Met up with the Aussies later in town for a late supper and a beer – sat next to the scorer, John! Let’s hope we meet them in the final and roll them over. Singapore and the Kiwis to come next.
Posted by Jon Marshall (Doc) at 04:34 No comments:

Team meeting at 09:30 beside the Carlton Hotel pool .  Prof, the other keeper (Webby was already with us), flew in yesterday, so we were at full strength.  A good opportunity to talk team formations and build-up.  Trish gave us a quick chat on managing liquids etc.  I need 15 minutes on my own, as do others, to do a full set of stretching and this is now built in to the squad pre-match programme.  A quiet day doing a bit of editing and email catch-up.  Went across the road to get lunch and a mango and banana pressed fruit drink.  Strolled to the Fort Canning park, but there were a few drops of rain and got back to the hotel ahead of a deluge.  Others were not so lucky and got soaked.  Met at 16:30 changed, dry by now, for the coach organised by Kaka and Irish, en route for our 18:30 game against Scotland.  The coach has made transport easy for all of us and helps in the build-up.  At the ground, we changed and had a team talk.  Ibuprofen on the ankle, strapped my toes and then the ankle support, and then did our own stretching for a while.  We came together for Vanessa to do a Pilates set, stretching muscle groups and we were nearly ready for the off.  With a tight match programme – O40s to O60s – there is very little pitch time to knock up, but we got on, hardly noticing the pitch watering – sweating freely.


Ken and Prof were off the pitch for this match – we can only name 16 players per game – so Webby was in goal.  I was off for the first 15, along with Bill, Andrew, Bruce and Kaka.  About 10 minutes in, Tim scored with a good follow-up and we were able to settle.  On at left wing after 15 and we made chances, Skins feeding through some good ball.  1-0 at half time and we were substituting regularly.  Came on at left midfield after 15 mins and we played out a mixed period, though did a lot of running. Took a right slip at a corner and was promptly tripped as I moved to get a shot. Scotland won a corner with 6 minutes left – a bit of pressure, but not converted.  Then up the other end, Bill got off a lovely pass to Kaka who scored well.  Result: England 2 – Scotland 0.
Back on the bus for a very late supper at a small restaurant near Raffles – to be the team Clubhouse – beers $7, which is cheap for Singapore! Then bed, if not to sleep, and preparations for Australia tomorrow evening.
Posted by Jon Marshall (Doc) at 03:07 No comments:

Arrived on the overnight flight from Amsterdam on Wednesday evening local time, having taken the KLM flight from Bristol.  Hilary dropped me off with my various bags. Met up with Bill Deayton in Changi Airport and used the MRT (Tube) to get into the city and walked to the hotel.  It is certainly warm (c. 28 oC) and there are regular thunderstorms.  We are right next door to Raffles, the famous hotel, so easy walking to many of the local sites, including Marina Bay and the famous merlion.  Clean, green and prosperous is a good description of the Singapore I’ve seen so far. 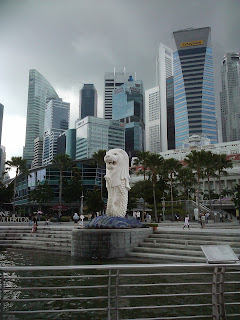 On Thursday evening we made our way to the tournament ground (about an hour on the MRT & walking) for a practice match against the Singapore U18s.  I was soaked with sweat before we started and drank and lost 2 litres over the game – we came second to some very quick and skilfull junior Olympians, but it was great to run off the flight, find out the best trainers to use etc. Not so good to shake up my worn ankle, but better by the following evening.
Didn’t sleep too well, so breakfast at 09:30 on Friday.  Bill and I took a trip to the Botanic Gardens – extensive and beautifully maintained, with fantastic specialist orchid and ginger areas – perhaps a good place for Sunday lunch with Hilary!  Back to the hotel for a meet at 4:00 for a coach trip out to the ground.  This was the Opening Ceremony, followed by a few matches.  England O60s beat Scotland, but in our age group, the Kiwi O55s looked very sharp and we left them 3-0 up against Singapore.  We have a team meeting at 09:30 tomorrow, a quiet day, then head for the ground to arrive at 17:30.  Our first game is at 18:30 against Scotland. Good luck to all the England squad and supporters! 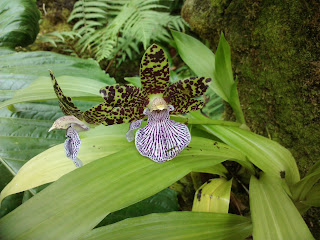 National Grid, that monolithic monopoly that is trying to put huge pylons across swathes of beautiful Britain, has just sent out it latest A3 size glossy “Project News” to Somerset householders.  This seems to be part of its second consultation – after the first was shown to be a sham.  However, this seems to be no better, with the company again only presenting overland options for its giant 46 m- high pylons.  These will pass through our Lox Yeo valley, despite it being a protected Area of Outstanding Natural Beauty – and despite them admitting that they have still not included an uncompleted independent report on undersea (the most obvious route) and underground options.
One also cannot but help notice the glossy cover has a great picture of Brent Knoll complete with gliding buzzard.  BEFORE: 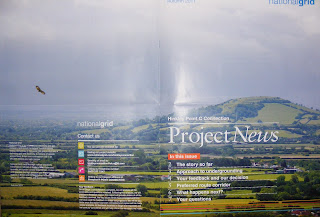 How crass, when one considers what this view will actually look like, if the pylons go ahead.  AFTER: 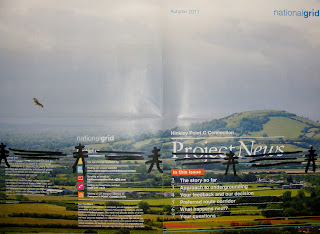 National Grid is a plc quoted on the stock market.  This means that profit for its shareholders is paramount, not what is best for the country as a whole.  Isn’t it odd that an organisation that is supposed to deliver power to all of us issued an index-linked investment bond on 6 October 2011.  This corporate bond will pay a generous inflation-linked rate of interest.  One cannot but conclude that this is another means that National Grid is seeking to buy popularity in advance of its proposals to put giant pylons across many parts of the UK.  Shame on them.
A second item of mail arrived on Friday – an unsolicited copy of the magazine “What Doctors Don’t Tell You” – a review of conventional medicine and safer alternatives.  I hope you never have the dubious pleasure of seeing this rag!  I’m sure that some things in it are fine, but the lack of science and sensationalism  - “Cancer-causing pesticides in your food, garden and home” – are breathtaking.  Have they never heard of ricin, or how pesticides are regulated, or that most are based on natural products?   What takes the biscuit is an advert for a device that, I quote, “creates ‘energised air’ that feeds every cell in your body with oxygen that it can absorb and use more efficiently”.  I could not let this pass without reporting it to the Advertising Standards Authority.
Posted by Jon Marshall (Doc) at 11:01 No comments: